Designed For Full-Channel Systems and Inversion

Basic principle of the resistivity method 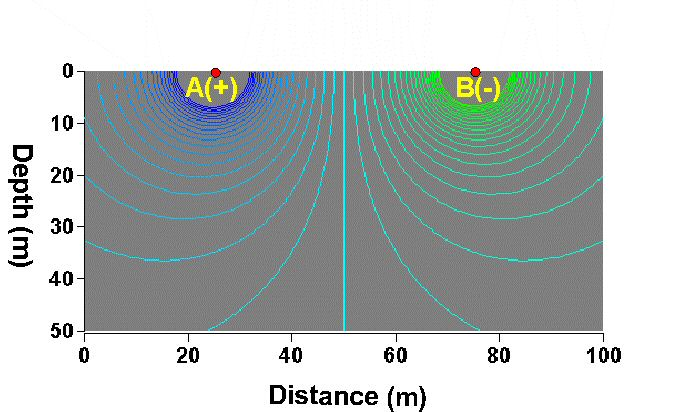 Figure 2. Voltage (potential) curve produced by a surface resistivity survey through a uniform medium, marking three sections: The left side of A, between A and B (AB), and the right side of B.

The medium below the surface is often not uniform, instead it can be anomalistic. For example, it may contain a high resistivity (Figure 3), thus the potential curve on the surface is no longer the same ideal form to that shown in Figure 2.  This is because the electrical field is distorted by this high resistivity . We can see this by comparing the two contours in Figure 1 and Figure 3, demonstrating that the potentials we collect on the surface contain the electric field distortion information. Therefore, we can use the collected potentials to calculate and find the underground target.  This is the basic principle of the resistivity method. 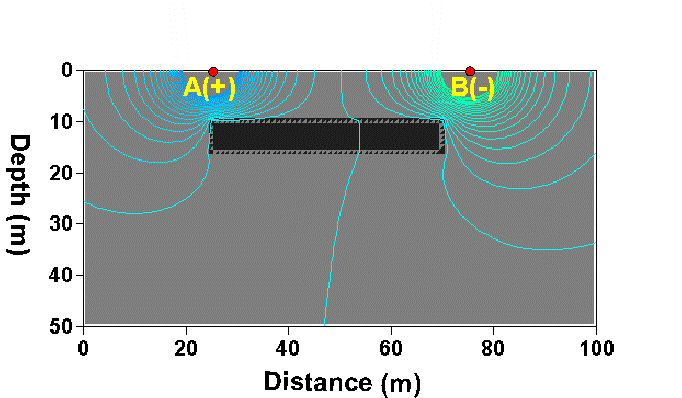 Figure 3. Electric field calculated from the same uniform background but with a relatively low resistivity anomaly in the middle.

The difference between multi-channel and multi-electrode

Currently, most resistivity instruments are multi-electrode systems, meaning there are more than 4 electrodes connected to the instrument during a survey; However, they may not be multi-channel resistivity systems.  The following diagram explains the difference between single channel, multi-channel and full-channel systems. 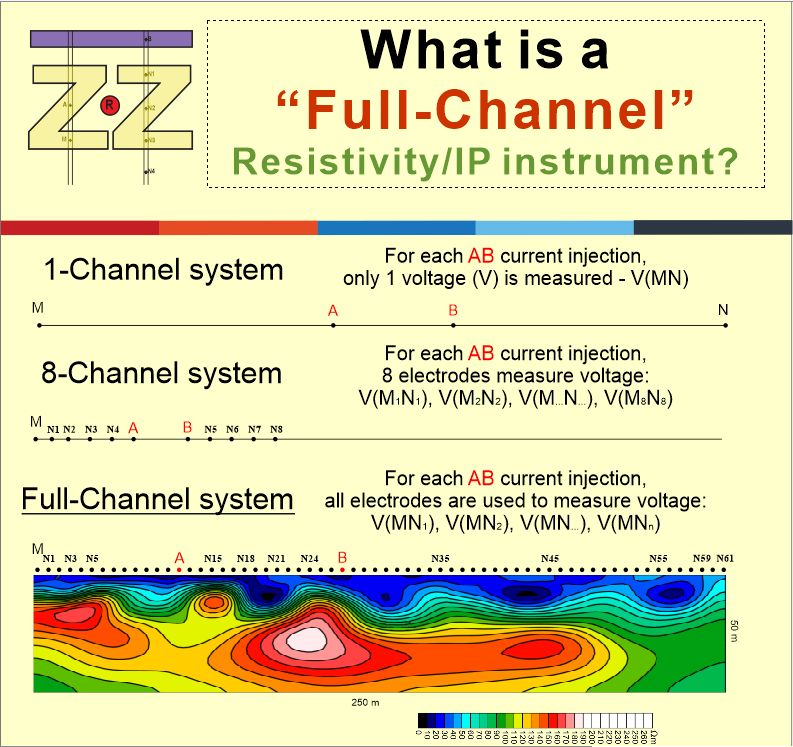 By comparing the two contours in Figure 1 and Figure 3, we can see that all potentials collected on the surface can be split into three sections: The left side of A, between A and B and the right side of B - each are distorted by the anomaly.  This means that all potentials collected from the three sections contain the distorted potential and provide useful data for later calculations.  Therefore, we should collect this information when possible.

Traditional resistivity data collection arrays such as Wenner, Schlumberger, dipole-dipole, gradient arrays, etc. (Figure 4), collect data from only one of the three sections comprising the potential surface curve (Figure 2).  For example, Wenner and Schlumberger collect data from the middle section between A and B, and the dipole-dipole array collects data from the right side of B.  The full-channel method will collect all potentials from all three sections (the left side of A, AB, and the right side of B) simultaneously.  Therefore, the full-channel method will collect much more potential information than any other arrays for each AB current injection.

The ZZ-Array uses full-channel methodology, meaning it will use all electrodes (except A and B) to collect potential data from all three sections simultaneously.  For symmetry, it uses a similar principle to VES.

For one system with 64 electrodes, if we set 3 AB pairs for each central point, we will have a total of 162 AB current pairs * 61 voltages = 9,882 ABMN data for a surface survey using the ZZ-Array.  For 64 electrodes, we can have a maximum 330 AB current pairs with the ZZ-Array and will collect 330 * 61 = 20,130 ABMN data. For further information, please download the ZZ Universal demo data acquisition program from www.zzgeo.com and try it.